Wharfedale’s new EVO 4 has grown out of the extensive research and development that produced the ELYSIAN flagship loudspeakers and borrows much of the technology involved in ELYSIAN. The primary […] 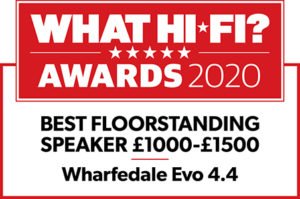 Wharfedale’s new EVO 4 has grown out of the extensive research and development that produced the ELYSIAN flagship loudspeakers and borrows much of the technology involved in ELYSIAN.

The primary focus is on the AMT development resulting in a radically different way of reproducing high frequency detail efficiently and accurately. Similar cabinet technology to ELYSIAN provides a stable and solid foundation for the drive units with radiused edges to help integrate the driver output with the room acoustics. In addition the unique SLPP bass reflex system, as developed for ELYSIAN, is now incorporated in EVO 4.

EVO4 AMT
Developed from the advanced AMT in ELYSIAN, EVO4’s Air Motion Transformer treble unit utilizes a radically different way of moving air compared to the conventional dome tweeter. A large, pleated lightweight diaphragm is driven across its surface by rows of strategically placed magnets. Not only is this an efficient way of moving air but it is also very accurate as the diaphragm is under close control of the motor system at all times. The result is a wide bandwidth transducer that achieves low distortion naturally and delivers wonderful musical detail.

EVO4 Dome Midrange
To match to the EVO4 AMT, Wharfedale has developed a fast and responsive dome midrange with wide bandwidth thanks to the incorporation of a damped rear chamber. This soft fabric dome, damped with a plasticizer coating, is vented aperiodically into a specially shaped rear chamber that is profiled to scatter and absorb rear energy from the dome. As a result this dome midrange features a linear response from 800Hz to 5kHz, an astonishing bandwidth from such a unit. Thanks to its high flux magnet, the EVO4 midrange dome also has a high efficiency, ideally matched to that of the AMT, enabling it to respond easily and quickly to the dynamics of the music fed to it. The wide dispersion of this dome and AMT combination ensures that you’ll hear all the musical detail no matter where you sit.

Like ELYSIAN, the bass units are loaded by the most advanced version of the unique Wharfedale Slot Port yet. Christened SLPP (Slot Loaded Profiled Port) the rear output of the bass units is not wasted. Instead the lowest frequency energy is vented to a slot at the base of the speaker, specially profiled to equalize the high internal pressure to the low pressure in the room.

EVO4 Crossover
Combining the outputs of the drivers is an advanced computer modeled crossover that has been developed over hundreds of hours of listening tests, fine tuned to make sure that the blend between the drive units is seamless.Crossover components have been specially chosen for their audio transparency and feature high-grade polypropylene capacitors and laminated silicon-iron and air core inductors, laid out to avoid electro-magnetic interference on a specially designed circuit board.

Stay in touch with Online
Hi-Fi via social media